The north west trail brings your group through ancient field systems, magnificent beaches and into territory that inspired Ireland’s greatest poets and painters.

Peppered with monuments that hold massive significance in these rural towns, it’s the stories behind the landmarks that will take your breath away. The tour begins with arrival in Shannon Airport, and leaves from Belfast Airport. 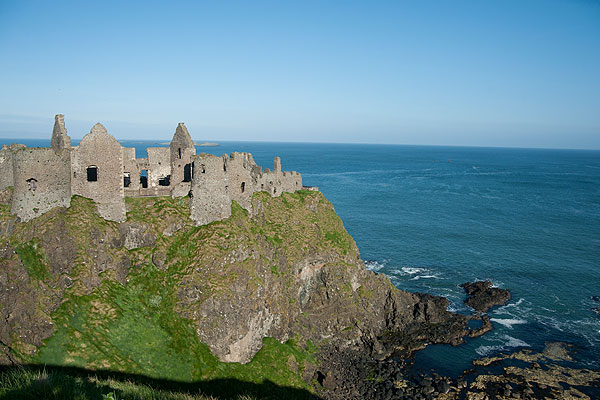 After an arrival in Shannon airport in the south west, move north Cong and with some of the island’s most famous landmarks along the route: the Cliffs of Moher , Bunratty Castle ,and the Ailwee Caves . The village of Cong is famously remembered as the location for John Ford’s The Quiet Man, where John Wayne and Maureen O’Hara fell in love and remains a key location in Connemara’s Film Trail . Both Lough Corrib and Lough Mask provide stunning views and are prime locations for keen anglers. Move out closer to the coast to visit Kylemore Abbey and its walled gardens. End your day in one of Westport’s many hotels.

Westport is a perfect base for delving a little deeper into both Connemara and Mayo. From here your options are plenty: either swing back south a touch and spend the day exploring the quaint villages around the beautiful Kilarry fjord (one of only three in Ireland) or head due west from Westport and the sublime archipelago of Clew Bay. Ferries visit Clare Island regularly (some even in Winter) while faith based groups may well fancy the challenge of the Croagh Patrick pilgrimage. Alternatively, swing inland and make for the Museum of Country Life in Castlebar or Foxford Woolen Mills both intriguing vignettes into a truly traditional way of life.

Leaving behind the buzz of Westport, you’re heading towards a world created 5,000 years ago. Fringed by bog and mountain, introduce the group to the Ceide Fields Centre. Detour into Ballycastle and to the coastline at Downpatrick Head, which has plunging blowholes overlooking the waves at Dun Briste. The passing whales and dolphins may pop their heads out to say hello again, too! Carry on to Killala, taking in the sandy beaches of Lacken, and watch out for the Ogham Stone before experiencing the welcoming banter of Killala where we advise an overnight stay.

Before racing out of Killala, head for the Humbert monument, which was built to commemorate the landing of the French army back in 1798 – the figure on top is not Humbert, but Mother Ireland. Onto the village of Ballina, and keep your eyes out for Rosserk Friary , which was founded in 1441. Those who’ve brought their rods or want to spend a little time on the river banks should also know that Ballina is the Salmon capital of Ireland. After casting your rod, head for Enniscrone, where the seaweed baths are a unique way to revive a group and end the day on a calming, restful note.

Set aside some shopping time in Sligo town before heading out into the landscapes that inspired two brothers renowned for their poetry and paintings, WB Yeats and Jack B Yeats. Visit Drumcliffe Church and graveyard , the final resting spot for W.B Yeats’, secreted in the shadow of the imposing Ben Bulben mountain Further north you’ll hit upon the famous resort town of Bundoran, renowned for summers of cotton candy and a vast array of watersports. Daniel O’Donnell fans will be keen to visit his Kincasslagh visitor centre set in the resplendent north coast of Donegal. Cruit Island Golf Club just minutes from O’Donnell’s family home, remains one of the most dramatic locations for a course anywhere on the island.

In Strokestown Park, Roscommon you’ll find the Irish National Famine Museum where you can learn about the great famine that took the lives of one million Irish people. Explore the six acre walled pleasure gardens of Strokestown Park House, featuring flowers and plants from all over the world. Stop off to take a walk along the River Shannon in Carrick-on-Shannon in Leitrim. Appreciate the town’s architecture and take note of Costello Chapel, believed to be the smallest chapel in Europe. Donegal’s Slieve League Cliffs are often cited as the highest in Europe and their grandeur is such to match even Moher’s famous rocks. Glenveagh National Park again in Donegal, is a fecund spread encompassing a hulking castle and celebrated gardens.

Please note this suggested tour can be tailored to your requirements.